Own a Gangster Home: The Gat House 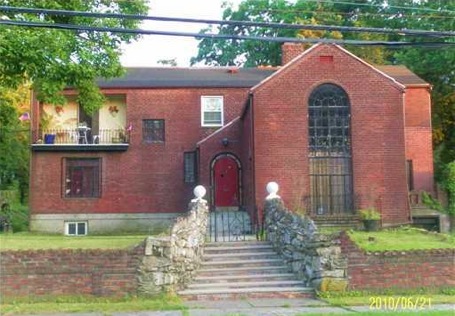 Prohibition. hidden tunnels. and gangsters. Oh my! The story of The Gat House located at 111 North Street sounds like something out of the movies. There are many rumors that come with this home that was built in 1932. According to the Newburgh Historical Society, this residence was once the home of “The Gat,” an associate of the notorious Dutch Schultz.

Regarding the architecture of the home, the NHS says it best,

“The Spanish/Moorish style house favored by “Hollywood” types is built of brick with a tile roof. A large fountain in the front garden enhances this theme. Inside the house, a wood paneled foyer opens onto a copper-leafed sunken living room with a wrought iron balcony high up on the chimney wall. The dining room boasts painted medallions on the ceiling. The music room is finished is gold-leaf with an elaborate painted ceilings and murals. The kitchen has been recently been renovated for style and functionality, but the Moorish feeling and original arched windows remain.”

Other interesting details that came from realtor Regina Dickerson: the tunnel that lead to a wooded area which is now the “Beebs” parking lot which supposedly still exists, but was cemented by the city in the 40′s.  Also, the home took 3 years to build during the depression and prohibition era and yet there are no “blue prints” for the home. According to Regina there are a lot more delightful facts about the home that can only be experienced first hand. (More history, pictures and stats on the jump!)

One last interesting mystery to end this story is the Dutchman’s lost treasure. Schultz fearing incarceration shortly before his death hid $7 million worth of cash and bonds in an airtight water proof safe somewhere in Upstate New York. The safe has never been found and “Gangland lore held that Schultz’s enemies, including Lucky Luciano, spent the remainder of their lives searching for the safe.” Treasure hunters meet annually to look for the safe. Maybe it’s hidden somewhere at this house in Newburgh? See below for more photos.

Find out more about living in Newburgh.

Creator and editor of www.NewburghRestoration.com. Encouraging the revitalization of Newburgh, a city approximately 60 miles North of Manhattan that has New York's second largest historic district.
View all posts by Cher Vick »