Ok, this isn’t a true carpenters’ Gothic, but I’ve always loved that style (and phrase!), and this house was renovated by its carpenter-owner. I looked at it a year ago, and I thought it had a lot of selling points.Unfortunately (or fortunately, for the lucky bargain hunter), it didn’t sell and was taken off the market. The agent will still show it to interested parties, though, and I think it’s worth taking a look.

The renovation was so thoughtfully done, with lovely wainscoting and exposed brick, and Cornwallville, as mentioned before, is an undiscovered gem, a rare combination artsy residents and lack of pretense. This house is right on Cornwallville’s main drag, which would be great if you’re the social type but not if you’re looking for the sort of country house where you’d never have to see a neighbor. The back of the house, with that deep high porch, overlooks a sloping field and the Catskill mountains. With a little bit a tree slaughter, you’d have a pretty fantastic mountain view. What’s not to love?

Stats on the jump. END_OF_DOCUMENT_TOKEN_TO_BE_REPLACED 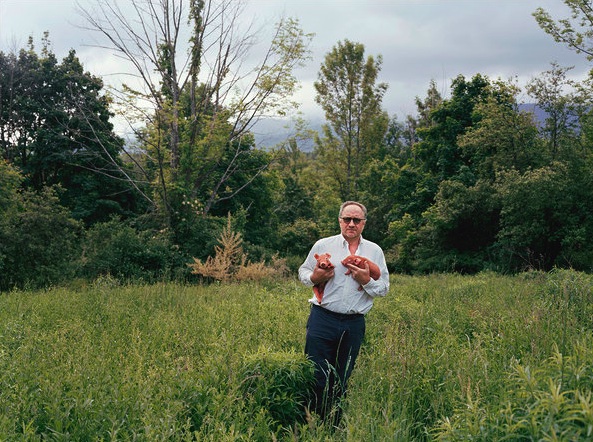 The second I saw artist Peter Nadin’s photo in today’s New York Times Magazine, I guessed that lush background had to be the Catskills. I can’t quite say why—there’s a lot of places that look basically the same—but there was something about that particular shade of green that just seemed right and familiar, like home.

Randy Kennedy profiles Nadin, a celebrated painter and former Soho art world insider who left it all twenty years ago to farm in Upstate New York (Cornwallville again!).  Nadin continued to make art, though, and he now uses materials directly from his land—cured ham, beeswax, honey. His work is currently on display in a very big way at Gavin Brown.

Nadin seeks to collapse the distinction between the experience of his art, its materials, and the very specific place it comes from, saying, “If you eat ham from one of my pigs or honey from my bees, then you’re ingesting the landscape here itself–it’s not an objectification of it.” Such interest in lived experience and messy biology are big trends in the art world, but Nadin comes across as sincere, with his stripes well-earned. Not incidentally, the profile is beautifully written. Here’s a favorite line:

“Watching a small, diverse farm over a couple of months beginning in early spring is like watching the machinations of a Chekhov play. The cast included 160 mostly wooded acres; a few dozen chickens and handful of ducks with the run of the farmyard; six Kashmir goats, plus an extra goat named Ham who preferred to commune with the humans …”

$134,500 farmhouse in the Greenpoint of Upstate New York

So I’ve decided that Durham/Cornwallville is the Greenpoint of the Catskills, or at least of Greene County. It’s kind of inconvenient, but has its own discrete charms, and it’s reasonably close to the stuff to do in Windham/Hunter (aka Williamsburg?) or even Woodstock/Saugerties (East Village/LES?). Because of the inconvenience—no easy public transportation, a longer drive for groceries, etc—the prices are considerably lower than in prime ski country or more famous hippie country (see previously mentioned towns). This makes buying a home in Durham (and its hamlet Cornwallville) much like buying a place in Greenpoint, ten years ago. It’s a bit of a hike to the bigger draws, but you can get a deal and the off-the-beaten path nature has it’s own sort of guarantee of wildness. (My analogy does not allow for massive high rise developments alongside polluted bodies of water, but I’ll work on that.)

This cheap farmhouse on Cornwallville’s scenic main drag is representative of the deals in the area. As mentioned, my former real estate agent raves about the sense of community in little Cornwallville. This 1800’s farmhouse looks spacious, if a bit low-slung, with plenty of hardwood floors and exposed beams and a wood stove for cold nights. The property extends beyond the fenced in backyard, with a view of woods and mountains. That fence gives it a slightly suburban feel that just screams “put a pool in it!” to me.